Inclusion specialist and FSB member Ellie Lowther discusses unconscious bias, her experience as a trans entrepreneur, and the importance of passion and resilience in business. 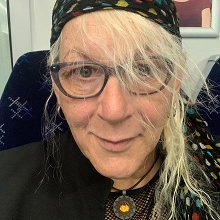 Ellie Lowther FRSA is an inclusion specialist and the founder of Essential Learning Curve Ltd. Nationally recognised as one of the foremost speakers around trans and non-binary inclusion, Ellie delivers inclusion training and workshops to thousands of people across the UK.

Ellie recently delivered an inclusion masterclass which you can watch on-demand.

Ellie’s roots are in the voluntary sector. Previously the founder of Trans Aware CIO, she still finds time to volunteer her time to support her community via various projects.

I was standing there, my hand was shaking with nerves, which became more noticeable as I was holding the paper I was reading from as it seemed to be flapping in the imaginary wind!

This was my first foray into public speaking at a ‘Let's talk Trans’ event which was hosted by my local council. Also at this event was a very prominent ‘face’ in the world of Diversity and Inclusion (D&I) locally, whose encouraging words to me were derisory and ridiculing, “Oh look, Ellie has notes!” as I took my seat at the event.

At that moment, I wanted the earth to open and swallow me whole as I felt such a deep sense of embarrassment at receiving such a comment from someone who I looked up to as a role model in the world of inclusion. I left that event with a different mindset than I arrived with that morning.

I look back on my achievements so far (I am far from finished) and realise that I could so easily have stepped back from what I am most passionate about after the experience. Also, I am pleased to report that I have used that negative experience as something I hope I am never guilty of displaying myself. My default position is one of encouraging and if possible, enabling others to work in the same area as myself and in a wider community sense.

I created the first trans specific safe house project in the UK and was blessed to be the sole binary trans finalist at the National Diversity Awards in 2019. I have personally supported countless people through transition and continue to do so around the UK. As an entrepreneur working in D&I whose work is led by my values, I feel I have proven the old adage of ‘do what you love, and you never work a day.’

That’s not to say the challenges faced aren't real. One day I was travelling around the country delivering training and consultancy that made a real difference and then everything stopped. The pandemic meant that absolutely no one was delivering in-person training and my option to move forward was to seek employment with a care company as my inner need to make a difference was and still is my driver. After six months, I returned to the world of inclusion with the potential of delivering online. FSB were absolute legends during lockdowns as they had a very healthy virtual networking series of events around the country which I joined fully and found extremely useful and often inspirational. The problems became apparent when I looked at my figures.

Even though I was a popular figure within the network events, I was shocked to see that nearly 90% of my follow-up ‘one-to-one' meetings where work could be booked were with female business owners. I hadn’t factored in the unconscious bias that still remains when engaging as a trans woman with cisgendered males. I do understand that many men from an older generation may not be used to engaging with someone like myself though rather than choose to engage and actually learn about the complexities and variance of human existence (which would have a positive effect on their business). They chose to avoid rather than engage.

I do feel that businesses that wish to thrive in our ever-changing world could do with recognising that when we have this friction within the structure of our businesses, we are setting ourselves up for failure. This issue isn't solely about trans or non-binary, this statement could also apply to LGB, race and faith issues as well as different levels of ability. Unconscious bias is something I tend to see in many more areas than you may imagine, so another aspect of being an entrepreneur is being able to have a clear vision of where we are right now, what the future looks like, and an idea of how to get there.

I have built my business on these aspects and would encourage other entrepreneurs to take on board some of the possible hurdles, though also understand that the main reason an entrepreneur exists is because of a passion. Harness that passion. Prepare to be resilient and have faith in the goal. It's often just around the corner though you may need a journey to get there.

Being a proud FSB member, I understand the value in a personal as well as a business sense of having supportive people around us. I am always open to connect with other members via LinkedIn and have a virtual cuppa to learn more about what you do. Our time here is limited, and I would love to think I could mentor others to carry the work forward. This is why the first event I spoke at is so important to me. And why that initial negative comment made me sure I would not treat others in that way, so please feel free to reach out and tell me what you’re currently working on.

Connect with Ellie on LinkedIn and read her business story here.

Visit our LGBT+ business hub for more stories, interviews and resources for LGBT+ small business owners across the UK.

Visit the hub
Return to listing